From Intergalactic Time Travel to Psychoactive Soy Sauce: Crowdsourcing at the Public Library

Just a week or so ago, the fabulous Julia Skinner authored a guest post here about crowdsourcing in 20th century libraries.  Today I’m following up with a little story about 21st century crowdsourcing! 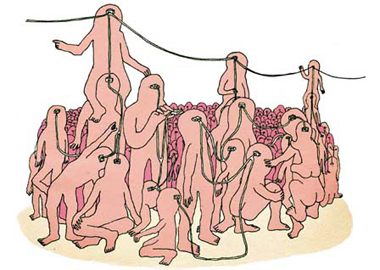 I think librarians everywhere can relate to this classic scenario:  a woman walked into our library last weekend wanting to find a book she’d read, but she couldn’t remember anything about it.  She began by describing a paranormal time traveling plot to my colleague:  “It’s about this guy who time travels between planets.  He works at a video store, and his best friend’s disabled sister is a major player in the plot.  Oh, and there are a bunch of people who aren’t quite what they seem.”

Soon I was recruited to help out, but by this time the patron’s story had morphed and had nothing to do with intergalactic time travel:  “So this guy wanders into an old building with portals to alternate realities, and then he turns into a demon.  I think his name is Evan, and the title is something catchy like Don’t Read This Book.”  She considered for a moment and then added, “but I just read another book with an Evan, so that might just be my default when I’m trying to think of a character?”

Readers, we searched the heck out of our library OPAC, subscription databases, and even Google.  We brought out all of our reference librarian superpowers, including field searching, synonyms, Boolean operators, truncation, wildcards, and pearl growing.  Meanwhile, the patron’s strategy was to search our catalog for the word “Don’t” and then go through each result one by one.

Finally the patron gave up and decided to go home.  On her way out, she gave me her phone number and I  assured her I would let her know if we found anything.  My colleague and I had already sunk over an hour into this search, and we were both feeling defeated.  But as a last resort, I decided I would take a stab at asking the rest of the library staff.  We mashed-up the multiple versions of her summary and emailed it internally with the subject line “Help Us Find This Book!”

Sure enough, within fifteen minutes, one of the tech services librarians fired back: “Is it John Dies at the End?”

I called the patron back, and she was ecstatic.  The thing is, there wasn’t any “Evan,” and I’m pretty sure there wasn’t a disabled sister, either.  The plot summary from Amazon reads:

video store clerk Wong’s—and his penis-obsessed friend John’s—minds to higher levels of consciousness. Meat monsters, wig-wearing scorpion aberrations and wingless white flies that burrow into human skin threaten to kill Wong and his crew before infesting the rest of the world. A multidimensional plot unfolds as the unlikely heroes drink lots of beer and battle the paradoxes of time and space, as well as the clichés of first-person-shooter video games and fantasy gore films.”

I’m convinced that the patron’s version of the description was, in fact, an amalgam of half a dozen books that she’s read this year.  Readers: how could she have forgotten the psychoactive soy sauce??  Yet although her details were fuzzy, we public librarians teamed up to do what the technical systems had failed do… we used our tacit knowledge to synthesize imprecise descriptors, and crowd-sourced the crap out of the answer.  And we ended up with one very happy patron.