Librarians on the Big Screen

Lawrence Public Library is hosting a shhh-ing, spectacles-wearing, bun-touting film series next month dedicated to a long lineage of Hollywood librarians!  Featuring happy hour specials across the street at the Eldridge when you show your library card from 4:30-6:30.  Hope to see you there — buns, glasses, and all! 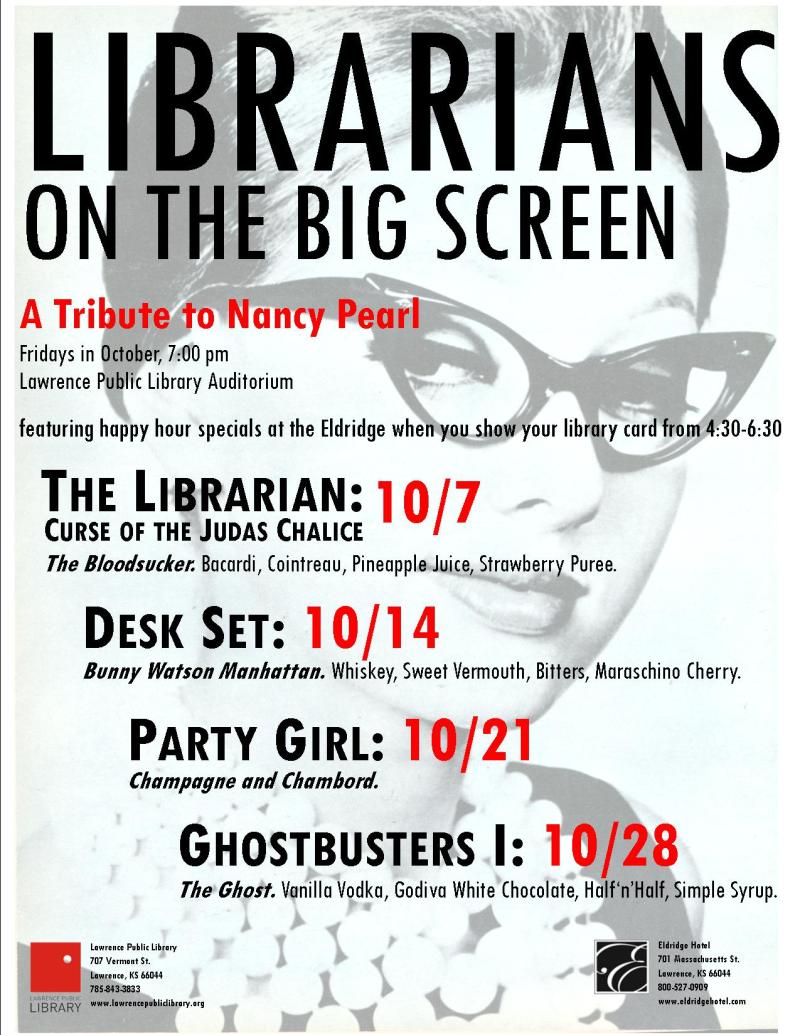 THE LIBRARIAN: CURSE of the JUDAS CHALICE: 10/7
Holy Vampires, batman! Noah Wyle’s uber-popular, campy, Indiana-Jones-esque Librarian series returns for a third installment with “Curse of the Judas Chalice.” Librarian Flynn Carsen (Noah Wyle) is drowning his sorrows in New Orleans after retrieving the philosopher’s stone but losing his girlfriend. There he encounters the guardian of the Judas Chalice, which is capable of resurrecting vampires! Vampire chaos ensues, including an army of the undead with Vlad the Impaler at the helm.

DESK SET: 10/14
“Desk Set” is the ultimate librarian classic! The mysterious man hanging about at the research department of a big TV network proves to be engineer Richard Sumner (Spencer Tracy), who’s been ordered to keep his real purpose secret: computerizing the office library. Head librarian Bunny Watson (Katherine Hepburn), who knows everything, needs no computer to unmask Richard. The resulting battle of wits and witty dialogue pits Bunny’s fear of losing her job against her dawning attraction to Richard.

PARTY GIRL: 10/21
24 year old Mary (Parker Posey) is a free-spirited young woman with a run-down New York apartment and a high fashion wardrobe. After being arrested for throwing an illegal party to help pay the rent, she calls her godmother — a librarian — for bail money, and begins working as a library clerk to repay the loan. At first Mary hates it, but ultimately she opens her heart to mastering the Dewey Decimal System while helping her roommate become a professional DJ and romancing a heartthrob falafel vendor.

GHOSTBUSTERS I: 10/28
After being kicked out of their university, parapsychology professors Venkman, Stantz and Spengler, (Bill Murray, Dan Aykroyd and Harold Ramis) decide to go into business for themselves by trapping and removing ghosts from haunted houses. After some initial skepticism, including a nearly botched attempt at exorcising the New York Public Library and a haunted card catalog, business is soon booming as The Ghostbusters rid New York of its undead. Co-starring Sigourney Weaver.