Eating Animals, With a Side of Transliteracy 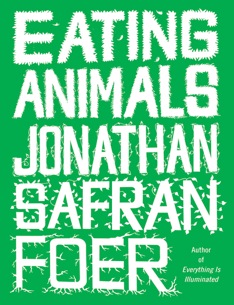 I know many of you have been gripping the edges of your seats in suspense, white-knuckled, wondering what has become of my quest to avoid meat!  Well, I’ve taken your suggestions and browsed lots of excellent vegetarian cookbooks:  World Vegetarian by Madhur Jaffrey, Vegetarian Cooking for Everyone by Deborah Madison, How to Cook Everything Vegetarian by Mark Bittman.  I’ve also gone against your explicit advice not to read Eating Animals by Jonathan Safran Foer.

I wasn’t sure what to expect when I picked up Eating Animals.  I’d really enjoyed Everything is Illuminated after hearing Foer read from it at a tiny bookstore in St. Paul in 2003.  I associate his writing style with lush, almost giddy romanticism, and thought, “well, that plus vegetarianism, sounds warm and fuzzy.”  Readers: Eating Animals is not warm and fuzzy.

What it is is two things mostly: a philosophical exercise, and an exposé on factory farming.  I really loved it, and recommend it to anyone who’s morbidly curious about the gruesome underbelly of industrial-scale farming.  Foer really crystallized my desire to stop eating meat, and freaked me out about eggs and dairy while he was at it! But I’m not here to proselytize, so I just want to briefly critique two aspects of the book as a whole — one thing that I didn’t like very much, and another that I absolutely loved.

One of Foer’s main arguments is that, although he’s not super excited about animal slaughter, this is small potatoes when compared to the suffering that animals endure while actually living on factory farms.  It makes sense if you stop to think about it for two seconds — the industrial farming system exists to maximize profit rather than to look out for animal welfare.  But Foer’s tone is fairly preachy, condemning any advocate of humane meat who would dare to even glance at a factory farmed chicken nugget — he basically calls author Michael Pollan a hypocrite.  My beef with this is that it’s nearly impossible to live cruelty-free unless you’re completely self-sufficient — and who is??  I’m certain that, at some point while writing his book, Foer wore clothes that were manufactured with cruelty.  And somebody else suffered to fuel his airplane.  And what about the carbon footprint of the printing, promotion, and distribution of his book?  Look: these are the kinds of questions that will drive you crazy; we’re all just doing the best we can.

With that out of the way… my absolute favorite thing about Eating Animals is its structure!  The book is presented as a series of interviews, with much of the original language left intact — Foer talks to slaughterhouse workers, PETA activists, agriculture execs, and even one vegetarian rancher (!), all of whom have different viewpoints but make excellent arguments.  It’s interesting to read their different tones; for instance, the PETA activist uses shock rhetoric and is way more bombastic than the other interviewees, invoking serial killers and slavery to make his points!  Cue the flashing librarian light bulb in my head… as critical readers, when we see this type of rhetoric, we should be trying to gauge the agenda behind the information being presented.  Who is presenting the information, and why?  What interests are at stake?  Is there another side to the story?  There’s no foolproof way to calculate the information’s legitimacy, no matter what some information professionals might say — even “peer-reviewed” isn’t necessarily a gold-seal of approval.  Maybe the PETA activist is right, but that doesn’t mean you can just take his argument at face value.  It’s important not to be a passive reader, and to actually think about this stuff.

I did find Foer’s conclusions persuasive, though, nonetheless for being backed by sound facts, a thick bibliography, and an articulate voice.  Yet Michael Pollan, who writes about similar subjects while reaching different conclusions, is also persuasive.  And so I started a mental thought-experiment:  “What if so-and-so had written this book?”  I could picture Thomas Friedman convincing me that if the U.S. didn’t factory farm, India would pick up the slack, leaving the U.S. to be devoured by a pack of wild hyenas.  Yep, I’d be totally convinced!  For me, this just highlights the need to seek out as many perspectives as possible in an effort to think about information from multiple angles.  This is transliteracy; this is what I really admired about Foer’s approach.

Anyway, I love getting your comments, so please feel free to drop me a note and let me know what you think about eating animals, cruelty-free living, critical transliteracy, you name it.  Or just tell a girl where she can get a humane egg hook-up!

11 thoughts on “Eating Animals, With a Side of Transliteracy”