Yesterday as I was scavenging historical tidbits to share via my library’s #todayinhistory Twitter feed, I came across this treasure from the August 23, 1973 edition of the Lawrence Journal-World.  I’m fascinated that this satirical piece was published long before the Internet (and especially social networks) were widespread.  Viva technophobia!

To help put this in context: just five years earlier, in 1968, Stanley Kubrick had debuted “2001: A Space Odyssey” in which the computer HAL takes on an eerily human personality.  In 1970, both the VCR and dot matrix printer were introduced, bringing more tangible, enduring qualities to personal technology.  Then, in 1971, IBM introduced the first speech-recognition software (with a vocabulary of 5000 words), and the first synthesized computer voice was also demoed.  And finally, in 1972, the floodgates burst when Atari released Pong.

Yet none of this explains the article’s bizarre fixation with marital infidelity.  Ladies and gentlemen, I present:

EVERYTHING YOU WANT TO KNOW?: THE FRIGHTENING COMPUTER TREND
by Art Buchwald

WASHINGTON – Somewhere in this great land of ours there is a computer stashed full of information on you.  Whenever you want a bank loan, a credit card or a job, this computer will, in a matter of seconds, give some total stranger almost every detail of your life. END_OF_DOCUMENT_TOKEN_TO_BE_REPLACED

My public library’s Twitter account has over 1800 followers.  1800!  This fall, a handful of us sat down to brainstorm how to get the most out of our amazing following.

In the end, we came up with three big goals.  First was to pare down the number of Tweeters we were following back, in order to focus on core users and really zero in on newsworthy happenings in our community.  Second, we came up with some key themes or “series” of tweets that we thought would appeal to our network, such as a “new to the collection” series and a “#todayinhistory” series.  And third, we set out to curate public Twitter lists that anyone in our community could subscribe to.

Ever since we began curating these lists, I get more and more excited about their potential every day.  I love that they’re so community oriented, which I believe really builds goodwill and adds an invaluable service that not many other local organizations are situated to offer.  We’re aggregating lists of individuals who have put themselves and their work out there via Twitter, thus leveraging our position in the community to help them be discovered by others who might have an interest in their work.  Some of our local lists include Lawrence Arts, Lawrence Techies, Lawrence Businesses, Lawrence Events, Lawrence Athletics, and Lawrence Bloggers.

My favorite of all these lists is Lawrence Bloggers!  Where else can you go to find a list of local bloggers??  To curate this list, we combed through all of our local followers and identified those who listed a URL in their bio (seriously, we went through 1800).  END_OF_DOCUMENT_TOKEN_TO_BE_REPLACED

Everyone Let’s Get Social

Having just attended a workshop where we talked about social bookmarking and tagging, I thought this would be an opportune time to tell you all about a fun project I worked on early last winter!  Two fellow students and I had been tasked with proposing a “digital information resource” — yep, pretty broad!!!  But our group had a strong interest in teen librarianship, and I was riding high on Andrea Lunsford’s Stanford Study of Writing, New Literacy, Content Creation, blah blah blah, and so we easily decided to propose an interactive, social catalog for teens.

If you don’t know much about social cataloging, don’t worry — it’s a phenomenon that’s been gaining momentum over the past few years, and you can read all about the theory and the nuts & bolts behind it in our paper if you’re interested.  END_OF_DOCUMENT_TOKEN_TO_BE_REPLACED

Around this time last winter, I was learning how to write code in the computer language, Python.  I thought that knowing how to code would make me a better librarian, and so I signed up for a grad class at the U of I.  For the record, I hadn’t cried because of a class since the fifth grade, when Mrs. Recinos gave me a “late” because I forgot to ask my parents to sign my assignment notebook.  But Readers, Python made me cry.

Eventually, though, I ended up with this cute little piece of code that can make collages out of pictures that you like: 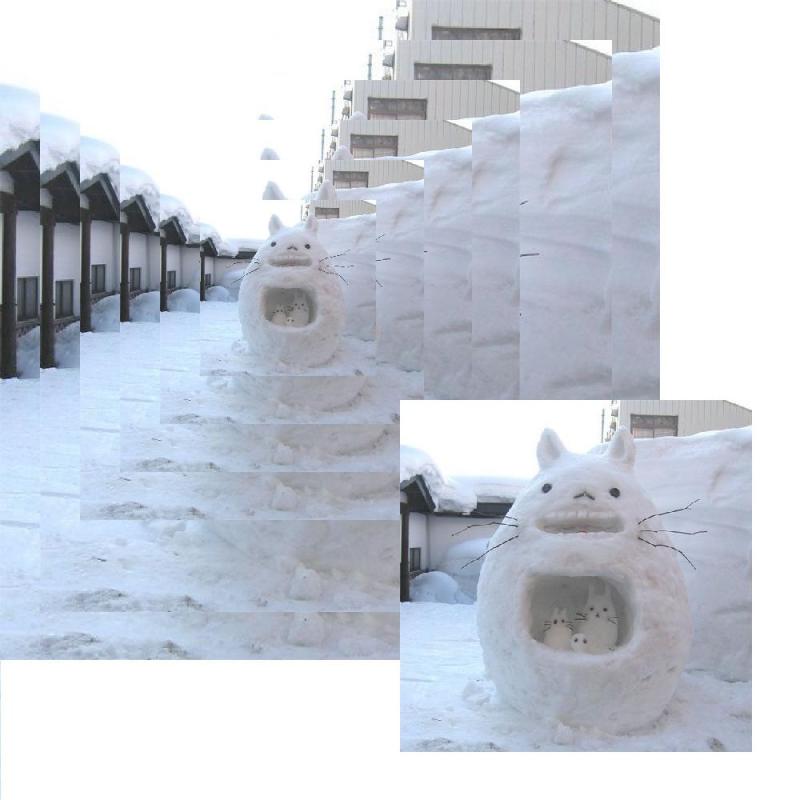 My professor was really amazing, and in the end I actually did OK in the class.  Having a supportive, code-savvy fiance with a knack for soothing hysterical people also helped.  But librarians — even though I know I couldn’t crank out a Python program on the spot today if my life depended on it, I do know that I could sit down with a text book for a few hours and figure it out, and that I am also now equipped to have intelligent conversations with library IT staff who write code for the library.  It’s nice to know that I can participate in building our library’s tools.

END_OF_DOCUMENT_TOKEN_TO_BE_REPLACED

How I Learned to Stop Worrying and Love My Kindle 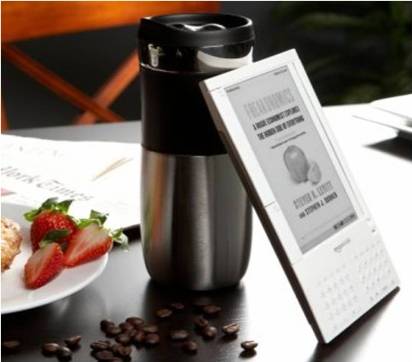 When I first bought my Kindle about 18 months ago, it was kind of a pain in the neck to use.  Amazon offered a pretty limited selection of titles for purchase that didn’t quite suit my nerdy tastes, and I couldn’t buy titles from anyone else because they wouldn’t be compatible with my Kindle.  Which was actually OK by me, because they didn’t have anything I wanted to read either.

Eventually I ended up settling for a copy of War & Peace, translated by Pevear and Volokhonsky, for three reasons: a) it was available, b) I actually wanted to read it, and c) it seemed like a pretty awesome alternative to carrying around 4 pounds of book (no joke!).  I also experimented with converting several of Project Gutenberg‘s public domain .epub titles to Amazon’s proprietary .azw filetype using some free software that I downloaded from the Internet, but the outcome was fairly hideous.  So really I had spent $375 for War & Peace.

But soon things started to get interesting.  END_OF_DOCUMENT_TOKEN_TO_BE_REPLACED

Video Games for People Who Don’t Like Video Games

Recently I decided that, seeing as I am married to a die-hard video gamer, it was only right for me to gain a little more exposure to the sport.  My husband passed the comprehensive exam for his PhD just last week, and to celebrate, I dusted off the Wii and finally played it with him for the very first time in the 10 years that we’ve known each other.

I did veto Legend of Zelda (too action-adventurey), Final Fantasy Crystal Chronicles (too role-playee), Super Mario Sunshine (too platformery), Teenage Mutant Ninja Turtles (too beat-em-uppy), Medal of Honor (too first-person-shootery) and Madden NFL (too sporty — wow, how is it that Aaron even actually loves me??), but I did find a few in his collection that I was willing to try, and in fact actually enjoyed.  I guess I’m what you’d call a casual “party” gamer–quick and dirty, in and out!  Here’s what we played:

END_OF_DOCUMENT_TOKEN_TO_BE_REPLACED

I’ve already written about why I don’t like Readers’ Advisory here on this blog.  Yet I was still pleased to get a lot out of Jody Wurl and Michele McGraw’s presentation — “Readers’ Advisory 2.0” — at last week’s Library Technology Conference at Macalester College.

Wurl and McGraw kicked off by asking “why should Readers’ Advisors care about Web 2.0 anyway — what does the Internet have to do with books?”  Trick question!  On the Internet, Librarians can go where the readers are and connect with them there.  The Hennepin County Library system, where both Wurl and McGraw work, has developed an online presence called Bookspace (powered by Adobe’s ColdFusion software) where Librarians can do just that — and for popular titles, the conversation often starts before the book comes out, from the moment it’s been cataloged.  Here are some of the other tools they like:

END_OF_DOCUMENT_TOKEN_TO_BE_REPLACED

Twitter can help library users draw the connection between pop culture, current events and library services.  This is what Rudy Leon argued last week during her presentation — “One Tweet at a Time: Developing Critical Thinking, Library Connections & Information Skills with Twitter” — at the Library Technology Conference at Macalester College.  (Her presentation slides are available here.)

Leon is a Learning Commons Librarian at the Undergraduate Library of the University of Illinois at Urbana-Champaign (UIUC).  Earlier this decade, UIUC conducted a study in which they learned that: Freshmen are totally smart! And they will circumvent the system in order to work around whatever they can’t figure out at the Library.  At the time, the Undergraduate Library (UGL) system was extremely decentralized, and Leon and her colleagues were trying to figure out how they could revitalize their services and help students.  Fortunately for Leon, her predecessors had already embedded a Twitter feed for @askundergrad into the front page of the UGL Website, and she was able to repurpose this feed in order to centralize information about the Library in a highly visible location.

END_OF_DOCUMENT_TOKEN_TO_BE_REPLACED

It was lunchtime, I was hungry, and Michael Porter from WebJunction was projecting graphic photos of his bloody hand.

END_OF_DOCUMENT_TOKEN_TO_BE_REPLACED

Spock may be half Vulcan and half Human, but he definitely knows what’s up with the Library Computer Access Retrieval System (LCARS) and the Personal Access Display Device (PADD).  This was the crux of Michael Porter’s keynote talk — “Libraries, Technology, Evolution, Change and Success” — at last week’s Library Technology Conference at Macalester College.  Porter, aka LibraryMan, argued that although librarians love serving our communities, we often do a terrible job with electronic content distribution!  He urged us to glean a little inspiration from Star Trek and to actively develop digital strategies for electronic content access.